)
"On the road to Silver Springs, three masked bandits hold up a stagecoach and hijack its gold shipment. Soon after, they spot a lone cowboy, ex-marshal Johnny Mack Brown, and steal his horse Rebel, forcing Johnny to hitch a ride on the stagecoach that was robbed. Onboard he meets passengers Mr. Creele, a traveling salesman and Cinthy Allison, the town banker's daughter. When they describe the robbery to Johnny, he fails to explain the reason for his horse's sudden disappearance, causing Creele to become suspicious. Meanwhile in Silver Springs, Allison has sent for a U.S. marshal to investigate the robberies of two previous bank shipments. In the meantime, Allison borrows heavily from livery stable owner Ed Hooper to cover the bank's losses. That afternoon the stagecoach arrives at Silver Springs and Johnny seeks help from Sheriff Frank Casey, an old friend, in locating his horse and the thieves. When reports that one bandit had a peculiarly loud laugh, the sheriff identifies him as Duke Mantel, one of Hooper's stablemen. Johnny then goes to the local saloon, where Duke recognizes him from the robbery and picks a fight. After Hooper fetches the sheriff to break up the fight, the lawmen pretends to not know Johnny and jails both men for disturbing the peace. When Allison and Hooper insist that the sheriff throw the stranger, Johnny, out of town, the sheriff tells Johnny to leave, explaining that as the sheriff, he takes orders from the town council, which is run by Allison and Hooper. The next day Johnny buys a horse from Hooper and the sheriff escorts him out of town, but shows him the way to Duke's horse ranch and encourages him continue his investigation there. Later that night, a shot is heard throughout the town and the sheriff finds Creele dead on the street, his wallet missing. The next morning the stage brings another stranger to town, Wesley Carrol, who claims to be the new marshal. That evening, Johnny arrives at Duke's ranch and eavesdrops as Hooper tells Duke and his two other henchmen, Spence and Pete, that they must kill Rebel to eliminate any evidence connecting them to the robbery. After Hooper and Pete leave for town and Spence goes to kill Rebel, Johnny knocks Duke to the ground and ties him up, then questions him about Rebel. When Duke refuses to tell him where Rebel is, Johnny begins to comb the hillside in search of the horse. He finally hears Rebel whinny and arrives at the scene just as Spence aims his gun at the horse. Seeing Johnny, Spence turns to shoot him, but Johnny fires first and wounds him. Johnny then brings Duke and Spence to town where he explains to Allison, Cinthy and the sheriff that Hooper is behind the robberies. Hooper refutes the accusation and insists that Johnny is actually the notorious bandit the Senora Kid. When new marshal corroborates Hooper's story, the sheriff asks for the marshal's credentials, which he readily provides. As Hooper, Carrol and the sheriff escort Johnny down the main street to the jail, Cinthy suddenly recognizes Carrol's wallet as the one stolen from Creele and runs to tell the men that Creele must have been the real marshal. Realizing that they have been exposed, Hooper and Carrol flee on horseback towards the ranch with Johnny in close pursuit. When Hooper and Carrol arrive at the ranch, Pete is already there with the money stolen from the robberies in his hand, his gun drawn. Hooper convinces Pete to leave town with them and share the money, but once Pete puts his gun down, Hooper kills him and then turns and kills Carrol as well. As Hooper is about to leave, Johnny arrives and a shootout ensues. After Hooper runs out of ammunition, Johnny approaches the house, feigning that he is shot. Thinking he is the victor, Hooper calmly walks out allowing Johnny to subdue the ruthless gang leader. Later, in town, after Allison admits that Hooper had him fooled, Johnny graciously credits Cinthy with the bandits' capture."
CAHILL, UNITED STATES MARSHAL 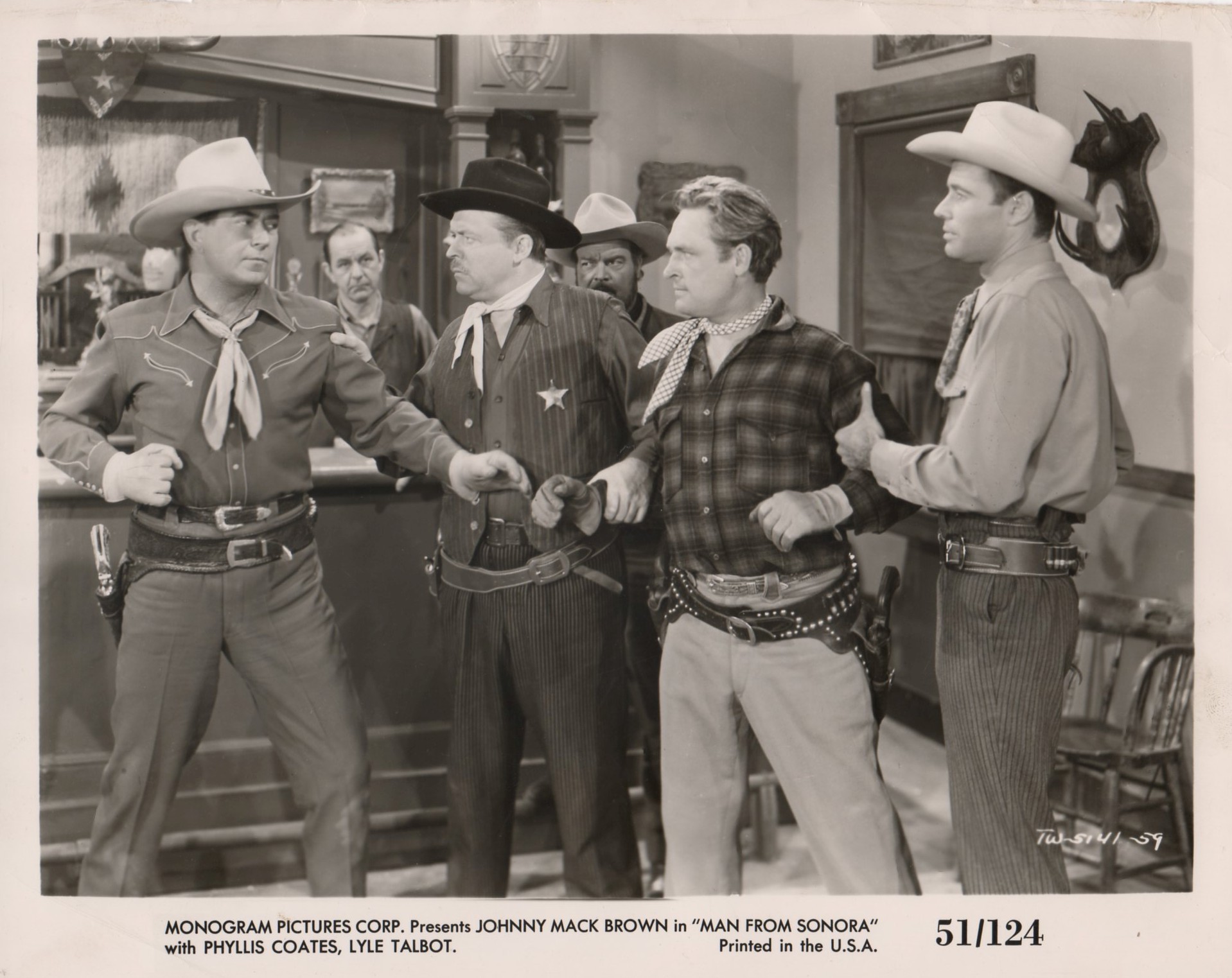