I was watching "Chief Crazy Horse" (1955), and I was trying to see Eddie Little Sky. I know that he worked on the film when they were filming on location near where he lived, though I don't know whether he was as an extra or a stuntman or both. Unfortunately, the film hasn't been released on DVD in the US yet, so the only copy I have access to is very blurry. However, I thought that, maybe, I saw Eddie Little Sky appearing as one of the native scouts in uniform at the fort, about halfway through the film. It was too blurry for me to tell for sure. 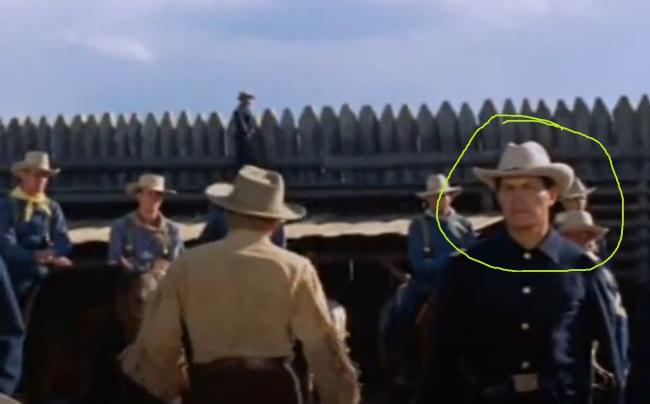 If someone who owns a nice DVD copy could maybe post a screenshot like mine, I would really appreciate it. Like I said, it's about halfway through the film. It's at the fort, right as Major Twist walks off to find his horse and warn Crazy Horse.
Or, if someone knows anything else about Eddie Little Sky's role in the film or spotted him in another scene, I'd love to hear about that too.

Here is a better one in CinemaScope :

If I'm not mistaken, he also appears in a few shots of the same scene (right next to the American flag) :

Wow, thanks! That's him.

It's interesting, because I assumed he was playing one of the scouts at the fort, but he appears to be a regular officer.

Thanks so much for the pictures! They're great!